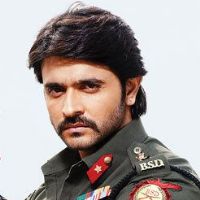 Ashish was born in Jaipur, Rajasthan. He attended India International School. He then pursued a degree in Fashion Designing from National Institute of Fashion Technology. His mother is a house wife and his elder brother is a computer trainer.

During his college days, Ashish was involved in theatre and street plays. He later shifted to Mumbai to become an actor and joined Anupam Kher's acting school. He participated in many theatre shows for almost four and a half years. Ashish started his acting career with Dibakar Banerjee's Bollywood movie Love Sex Aur Dhokha on recommendation of Anupam Kher.

Ashish began his television debut as Avdesh Singh Thakur in Gunahon Ka Devta TV serial on NDTV Imagine Later he was cast in Chandragupta Maurya on the same channel. He was seen in Rab Se Sohna Isshq as Ranveer on Zee TV. Ashish is now seen on Colors TV's project titled Rang Rasiya The actor portrays the character of Rudra opposite actress Sanaya Irani. The show was launched on December 30, 2013 at 9:30 pm. Rang Rasiya is said to be the biggest launch for Colors TV this year. It is produced by Saurabh Tiwari, head of Nautanki Telefilms'. The show will be an intense love story which tells the tale of a girl in love with a man who denies the relationship. How they gradually come together is the crux of the story.

On 30th January 2013, he married his long time girlfriend Archana Taide. Their wedding ceremony took place in Hindu tradition as well as in Christian custom since Archana is from a Christian background. They have adopted two dogs, a cocker spaniel named Carbon and a golden retriever named Scotch.